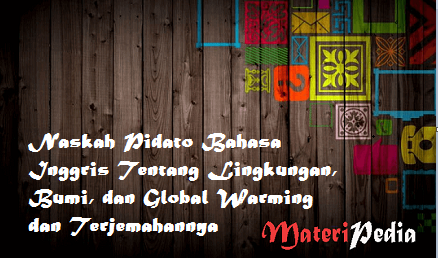 First of all, let us praise to the Almighty Allah SWT, because of His Blessing we are able to attend this English speech contest.

Secondly, may peace be upon the prophet Muhammad Saw who has guided us from the darkness into the brightness.

I also would like to say many thanks to the juries and MC who have given me opportunity to deliver an English speech in front of you all.

The title of my speech is “Save Our Earth; Save Our Forest”.

As we know, people from all over the world always commemorate Earth Day every 22nd April. The idea of earth day is based on the awareness to save this world from the environmental destruction. It aims at making global movements to participate actively in saving our earth – the only planet in which we live.

Our country, Indonesia, which is known as the emerald of equator, has an important role to keep the balance of world ecological system. 63 percent (or 1,134,000 km2) of our land territory is still as a forest. Meanwhile, the water area is more than 317,000,000 km2. 17 percent of world plant and animal species live in Indonesia. It indicates that the ecosystem and environmental condition in Indonesia will affect the world. In other words, the environmental damage in Indonesia will influence the sustainability of world environment.

One of the causes of environmental damage is deforestation, or known as the destruction of forest. The deforestation has caused many disasters in this world, including Indonesia. Floods, earthquakes and landslides are examples of killing disasters which make us realize that the existence of forest is very important.

In Addition, another effect of deforestation is related with the global warming or the increase of global surface temperature which is mainly caused by the greenhouse effects. We all know, one of the most crucial issues in celebrating Earth Day is the global warming. It warns us that our earth is in danger and we should participate actively to take care of our environment.

The question is, what is the relationship between Earth Day, global warming, deforestation, and Indonesia?

Indonesia lies in the equator, between the Tropics of Cancer and Capricorn. Because of its location, Indonesia is rich of rainforests. Scientists state that the function of rainforests is as the lungs of the world. They absorb greenhouse gas emissions, turn carbon dioxide (CO2) into oxygen (O2). It means that if deforestation keeps going on, the greenhouse effects can not be reduced and finally the global warming will keep increasing.

We live in the same world; in this earth. The importance of saving our environment, especially our rainforests, is the need for all of us, for human being to survive. It is not only for us, but also for our next generation ----/