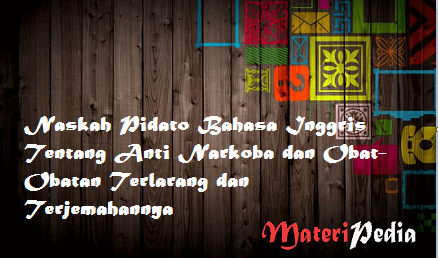 In The name of Allah, the beneficent, the merciful. Praise be to Allah the lord of the world, and the sequel is for those who keep their duly unto him, further, there will be no hostility exept against wrong does.

Blessing and salulation be upon the most honourable prophet and messenger, his family all his disciples, and those who follow them in goodness till the day of judgment day.

Besides, I should never forget to thanks the protocol who has fiven me the opportunity. So, I can that deliver my speech in front of you all to day. In this good occasion I desire to preach on the title :

“SAY NO TO DRUGS”

Thousands of young men have wasted their lives because of illicit drugs in our country, Indonesia. They were mostly victims of a ‘cruel’ environment, a broken-home family, of ignorance, of curiosity or particularly of the illegal drugs mafia. It is estimated that around 4 million people in Indonesia illicit drug users – about one in every 50 Indonesians. In the capital city of Jakarta, it is estimated that three out of ten young people are users. A study by the International Labor Organization (ILO) office in Indonesia showed that around four per cent of illicit drug users in the country are children under 17 years old. Two out of ten users are involved in illicit trafficking. Some teenagers start being involved in producing and trafficking drugs between the ages of 13 and 15. Chairman of the National Narcotics Coordinating Board said that the country’s illicit drug users include around 7,000 junior high school students, over 10,000 senior high school students and about 800 elementary school students.

religious wahai people who! in fact liquor, gambling, ( berkurban for the) fetish of, and ballot the chance of denan dart, [is] devil deed. hence avoid ( that perbuatan-perbuatan) [so that/ to be] Iucky you. ( Q.S Al-Maidah : 90 )

People usually take drugs to have fun or escape the pressures of life. Drug users among students are particularly worrying. It was reported that a number of traffickers operate around schools by cheating, forcing or giving free illicit drugs to students. Once the students are addicted, they then go to the traffickers to buy the illicit drugs. If they do not have money, they steal it from their family members or others. Narkoba’ is the Indonesian term for narcotics, psychotropic and addictive substances. Psychotropic substances popularly called Ecstasy and Shabu-shabu are considered favorites among the middle and upper class users. However, for an increasing number of young people, the drug of choice is low-grade heroin, known as putaw, which is cheap, plentiful, but potentially deadly. These drugs are readily available in all major urban areas, including schools, Karaoke lounges, bars, cafes, discotheques, nightclubs, and they even spread into remote villages. Therefore it is not surprising that drug users continue to increase from year to year.

The facts above showed us how familiar “Narkoba” issues In our young generation. First we should know what’s the meaning of drugs addiction? Drug addiction is a complex brain disease. It is characterized by compulsive, at times uncontrollable, drug craving, seeking, and use that persist even in the face of extremely negative consequences. Drug seeking becomes compulsive, in large part as a result of the effects of prolonged drug use on brain functioning and, thus, on behavior. For many people, drug addiction becomes chronic, with relapses possible even after long periods of abstinence. The Definition confirm us how serious the consequences of using Drugs.

Drug abuse has also contributed to the increase of HIV/AIDS patients, through the usage of unsterile injections. According to a report based on an illicit drug and injection safety study of 20 Asian countries conducted by the Center for Harm Reduction in Australia’s Burnet Institute, drug injecting is spreading to all the countries [of Asia] and its popularity is increasing. Our Country, Indonesia have up to 1 million drug injectors, and 19% of them were infected HIV/AIDS. How Dangerous the drugs abuse for us.

This is an extremely serious issue for us. It’s a threat that could kill an entire generation. One generation of this nation will be lost if we do not take action together and immediately. In short, we must be ready to go to war against illicit drugs and the war must start from home.

then, what can we do as the young generation? Prevention is better than cure. AVOID the Drugs, don’t ever think to try just b’coz you curios. because once you try, you will be trapped and later become addicted, and the addiction will finally turn you into criminals or take your lives. We have so many example around us, what happened to the users. Some b’come crazy, Some was going to the jail, And The others were died. All of them loose their future. I believe we don’t want such things happened to ourselves.